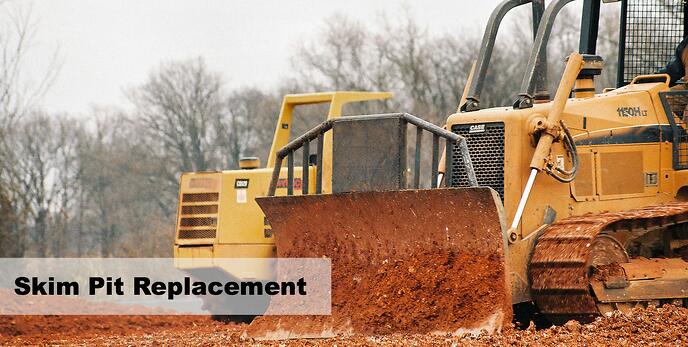 Every project faces it’s own set of obstacles and challenges.

Recently, AMG was tasked with replacing a severely deteriorating skim pit for a soybean facility within the confines of a 14-day facility shutdown. If we were unable to deliver the final project in that short window, the facility would begin losing money hand and fist for each additional day the plant was shut down. Here’s a step-by-step overview of how AMG worked a solution despite the myriad of challenges both before and during the project.

Step 1: Get familiar with the former skim pit.

A skim pit is an object that separates hexane, or a soybean oil and hexane mixture, from water. Typically, a structure like this stands in ground and is lined by concrete, while water with minute amounts of oil is pumped inside its depths. At this particular facility, the skim pit was a massive cast-in-place structure, severely deteriorated by years of use. The facility faced a critical need to build a new pit fit suited for the demand of production.

This project would require two basic components: the removal of the old skim pit (as it was located where the new pit would need to be placed), and the placing of a new skim pit ready for production.

Step 2: Line out the challenges for the project.

This was an aggressive project for sure – with the facility setting a 14-day shutdown to make room for the demolition and construction. Beyond the short window, the following challenges threatened the project:

Step 3: Develop a plan for the new skim pit.

In addition to the basic replacement, engineers had to find a way to make the new skim pit more resistant to the fatty acids found in soybean oil. With a customer design already in mind, the decision was made to build the new skim pit by using a segmental, precast concrete pit. The new pit would need to be:

With both demolition and construction plans firmly in place, and a project budget assembled, it was time to assign roles to qualified subcontractors and set the marching orders into place. Under the direction of AMG, the following assignments were lined out:

Step 5: Adapt to challenges during construction.

Just like any other job, nothing ever happens flawlessly. We were faced with several obstacles along the way but were able to overcome them and deliver the end result just as the client requested. Some of the hurdles we had to overcome were:

Despite facing complicated obstacles, AMG planned and implemented tactful solutions. The team successfully delivered the skim pit in the 4 segments, with dimensions of 36’ by 18’ by 12’ with the overflow baffles included. Hence, the proposed tasks were effectively completed on time, while satisfying all of the specifications and customer preferences.

No matter what the project, AMG is dedicated to working through and finding a solution that will provide our clients with exactly what they request. The soybean skim pit project is just one instance of AMG’s ability to deliver proven solutions to our clients. 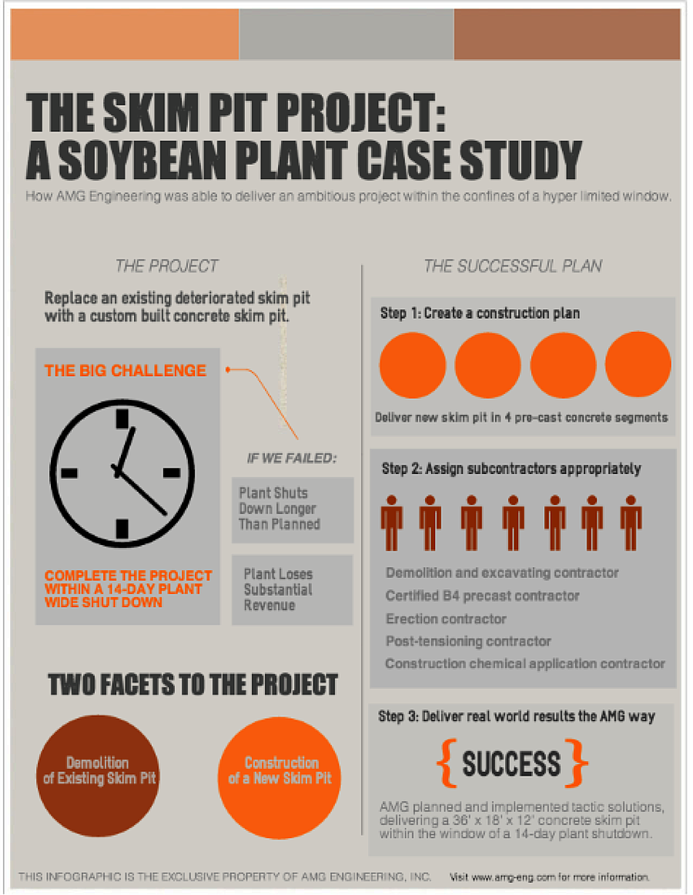