There were many constraints and challenges.

The complexity of supporting the headhouse and the tripper conveyor truss on the moving silo roofs was the most challenging.

Figure 1 – shows a sketch depicting the ½” variable, reciprocating lateral movements of the roofs of the (28) silos due to the 1/8” vertical deflections of the supporting trusses caused by filling and emptying of the 2,000,000 pounds of aggregate in the (4) silos supported within a bay.

Figure 2 – shows the innovative column base anchorage detail that was used to eliminate the need to coordinate (20) shear lugs with the foundation design engineer. The two 2” Diam high strength threaded rods are sleeved through the 3 ft thick pile-supported mat foundation and post-tensioned to create a constant normal force to generate shear-friction and strong axis bending moment.

Figure 3 – shows one of the mid-bay joints where truss framing from 8 directions intersects.  The trusses support four silos or a total of 2,000,000 pounds.

Figure 5 – shows the headhouse extension beyond the silos which is supported by unbraced columns to permit relative horizontal movements between the ground and headhouse.  The columns are located under the intersection of the supply conveyor bridge and the tripper conveyor bridge while the headhouse cantilevers in two directions.

Figure 6 – shows the tripper conveyor bridge which is designed to maintain a straight line while the headhouse floor on which it rests moves alternately back and forth beneath it.

Figure 7 – shows the 80 ft tall headhouse access stair which is designed to move with the headhouse while the base is fixed.

Figure 8 – shows the erected silo platform support structure, the 28 silos, and the headhouse frame before the cladding was installed.

Figure 9 – shows a panoramic view of the total project.

Software Tools That Were Used: 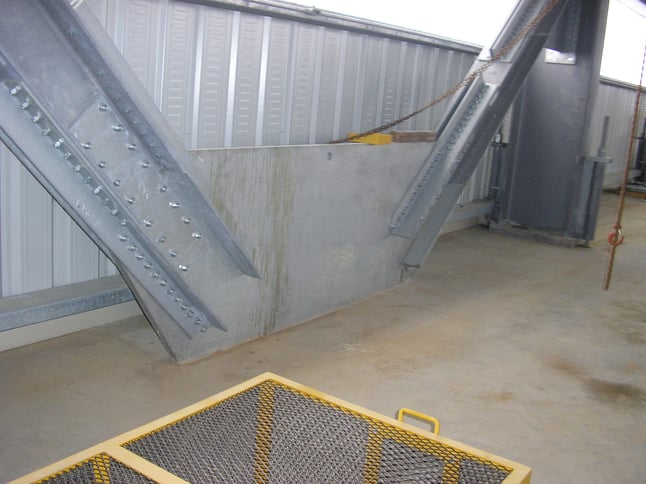 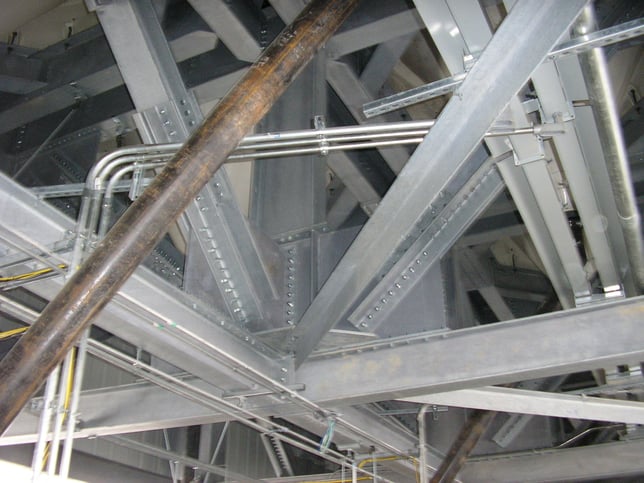 Figure 4 – Photograph showing Headhouse supported by UHMW Polyethylene pads and Rollers to permit silo movements while providing headhouse support reactions.  One pad for gravity load, two vertical rollers for lateral load and one horizontal roller for uplift load.  The three acting together permit longitudinal translation and horizontal rotation.  (Note that one of the two vertical rollers is obscured behind the support beam). 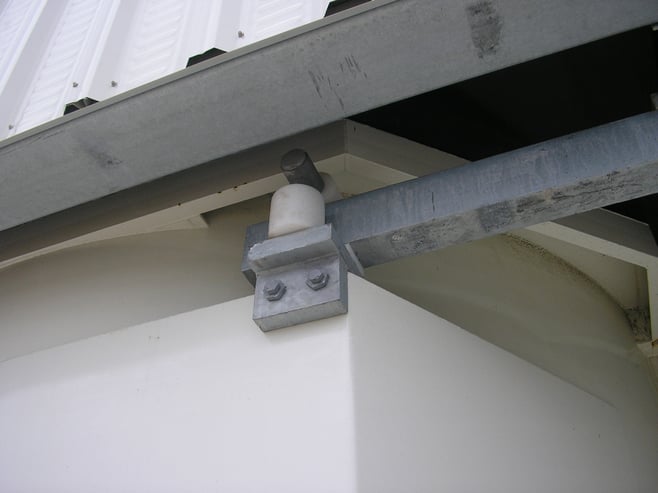 Figure 5 – Photograph showing Headhouse extension beyond silos which is tied to silos with a horizontal truss for lateral stability while supported by unbraced HSS columns for gravity and uplift.  This permits lateral movement of headhouse relative to the ground. 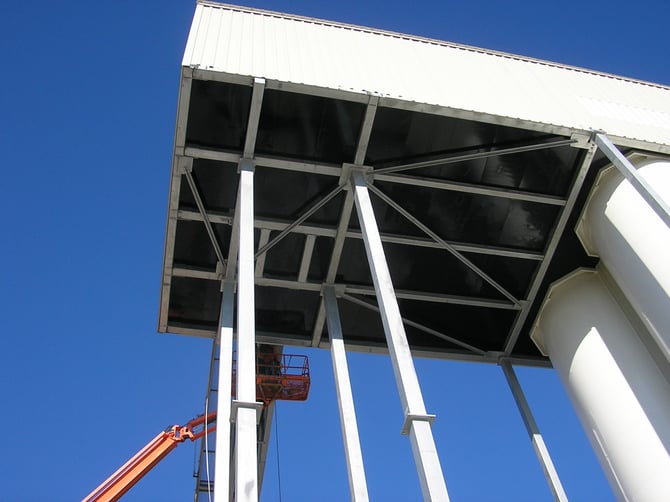 Figure 6 – Photograph taken inside of headhouse showing the tripper conveyor carried on a truss bridge that is supported on each bent at 28 ft for gravity load but spans 200 ft horizontally to maintain the alignment of the conveyor.  Each piece of floor plate covering the interstice is tied to only one silo to permit differential movement. 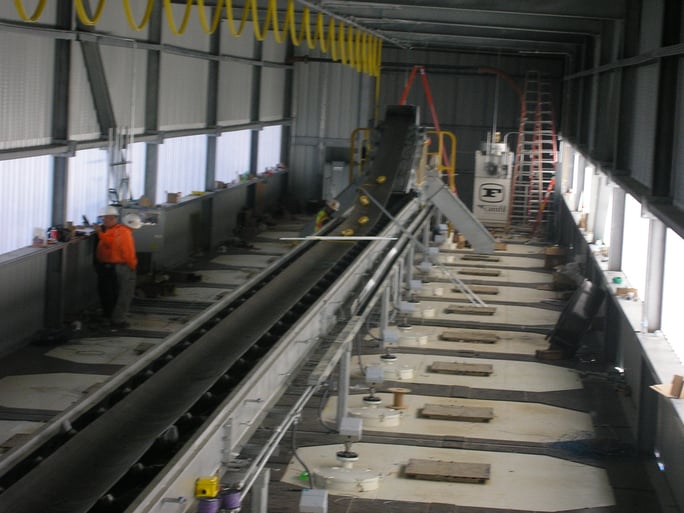 Figure 7 – Photograph showing headhouse access stair supported by a single HSS center post so that the top and mid landing can move relative to the base with the lateral movements of the headhouse. 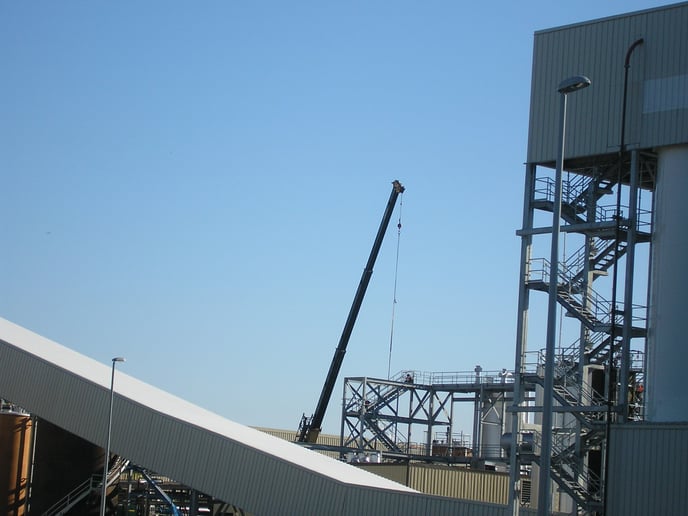 Figure 8 – Photograph shows the silo support platform, silos, headhouse, stairs, the tripper on its bridge, and parts of the supply conveyor bridge and the twin gallery conveyor bridge. 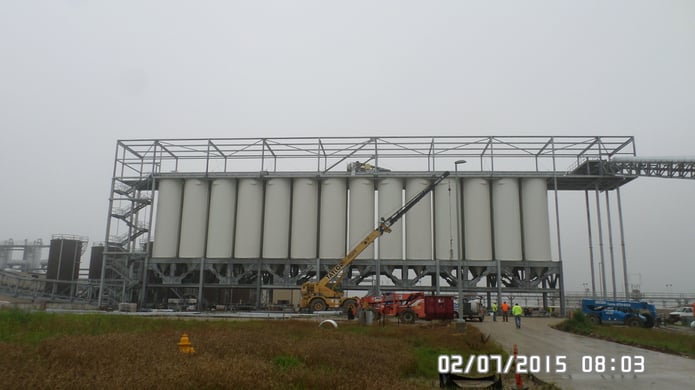